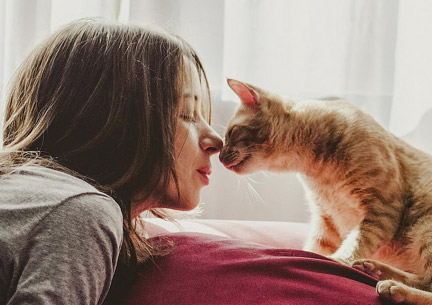 What Your Animal Companion’s Know About You

Everything.  There is nowhere to run, nowhere to hide!  I needed therapy after my first animal communication session with my beloved cat and mentor, Pookie.  While she said quite a few nice things about me, she also remarked that I thought too much and that she didn’t want to sit on the couch with my husband and I in the evenings because she wanted us to sit together (ouch).  Additionally, my overthinking clearly got on her nerves.

Animals know what we say and what we’re thinking, no matter what language we are expressing ourselves in.  I wish all veterinarians knew this.  I once had an animal communicator tell me that a horse informed her when she asked how he was  “I have a tumor as big as a grapefruit!”, which is exactly what he overheard from the vet.  The horse was obviously quite concerned and this was an additional source of stress in his life.  I once remarked on how expensive a certain cat food was and my cat stopped eating it.

On a  more humorous note, I once received a call from an animal communicator letting me know that my cat, Pookie, had a potty mouth.  When we were able to talk in person, she told me about several choice phrases Pookie had used, including one that my husband often uses when he watches the news “Bullshit, this is Bullshit”.  She also proceeded to repeat not what he said, but what many people are thinking when they watch the news-phrases such as “This country is falling apart”, so she picked up on the fear that was underneath his statements as well. While I am not an animal communicator, I do get messages from animals.

Several weeks ago, I was passing by a boarding stable and sent out the thought “I love you.  You are beautiful” to the horses there.  My beloved Pookie, who crossed over last year was a little jealous of my connection with horses.  I have not been working with horses as much as in the past, in particular since my new little one, Gabby, has been with us.  Immediately after sending out the thought, I heard “Pookie told me about this!”, so not only did she know what I was thinking a couple of miles away., she and Pookie were talking about me!”  I later confirmed with the animal communicator that she and Pookie had been talking.  Yes, even when they are not physically with us, they know!